How to Decorate Around a TV

If there’s one thing I’ve noticed when looking at inspirational design in magazines or on websites or Pinterest, it’s the lack of televisions in living rooms. For some reason, you just rarely see them. It’s like the photographer or stylist doesn’t want you to think that these people who live there are so crass as to actually, ya know, WATCH TV. Except that most of us do. And most of us are going to have at least one television in our home, if not more than one. So when searching for ideas of what to do with that big black box in our home, it’s a little difficult to actually know how to incorporate it into your room design when there are so few representations of great design out there that include a TV.

For my own living room, I simply bought a white TV that married well to the vintage painted cupboard I have it seated on.

However, you may wish to disguise your own television a little more than I do myself so today I thought I’d share a few ideas on some of the best ways to decorate around a television and at the same time, remove some of the mystery around using a television in your own design scheme.

Create a Gallery Wall Around It

This is one of my favourite ways to disguise a television by simply placing artwork around it, making it look a part of a bigger collection and thus, removing the attention away from it. Obviously the television is still there but it doesn’t act as the main focus any longer. You can hang it on the wall as has been done here…

Or you can simply layer artwork behind it if you wish for the television to remain on a stand.

Flank it with bookshelves

It’s quite popular to install a television above a fireplace mantle and while I would argue that the television would be at too high an angle to view comfortably whilst seated, I do think it looks great when flanked by twin bookshelves on either side. The resulting aesthetic is purposeful and balanced and the interesting styling creates a cohesive design.

Similarly, you can create a shelf that sits lower than this and comfortably sit the TV on a long stretch of built ins like this example…

Hide it in an alcove

If you have an alcove in your space, the placing the television within it will make the TV visually recede. I love the effect of this example where marbled paper has been installed behind it, creating a feature of what could potentially be an eyesore.

Hide it on a shelf

If you aren’t as fussed about having a huge TV and just need something for occasional use to catch up on your favourite Netflix series, then having a small television and hiding it within a dark coloured bookshelf is another option. This one is quite low down on the shelving making it seem almost an afterthought but you could simply create enough space in some higher shelves to make the look work for you.

Hide it within a piece of furniture

This one will require some custom designing I’m sure but being able to simply hide the television with a gadget that lifts and drops it within a piece is another great way of ensuring your television is not the star of your living room.

Hide it behind a panel

Similar to the above solution, consider a panel that slides over the television when not in use. You could also consider using a large piece of artwork or a mirror installed on top of the panel to create some interest when the TV is hidden away.

Instead of hiding the television away completely, there is always the option of just embracing it and making it a feature. I love the idea of using a picture frame slightly larger and creating a piece of ironic art out of it.

So those are just a few ways you can use a television within your design scheme. Which option do you like best? I’d love to hear from you!

A Social Media and Content Marketing Editor, Kimberly Duran is an Interior Design-obsessed American ex-pat, who chronicles her decorating journey in her personal blog, Swoon Worthy. When she's not helplessly drooling over blogs, design sites and adding things to the imaginary 'shopping basket' in her head, she likes to get messy tackling DIY projects with her partner in crime, Wayne, stalk eBay for bargains, take Instagram pictures of her cats and invest time in her on-going love affair with gold spray paint.

Creative Ideas for Open Storage in the Kitchen 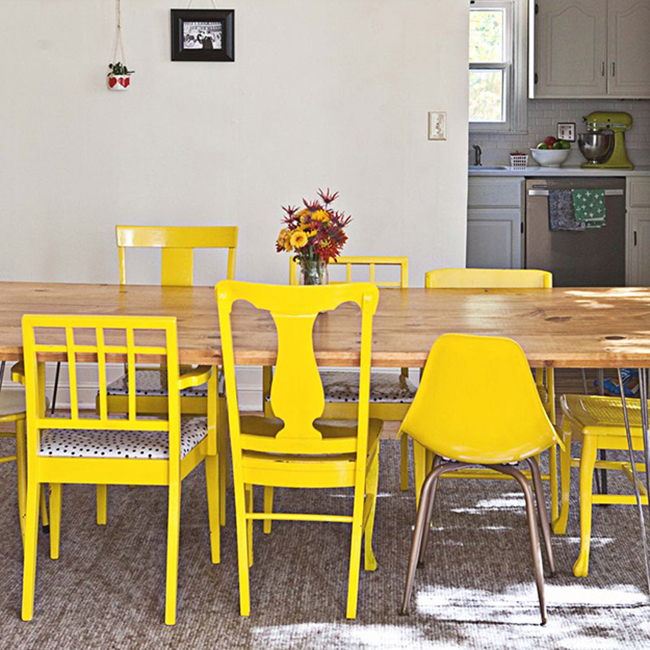 How to mix styles

How to choose the perfect dining table

Styling your home for autumn

5 quick and easy ways to update your home this autumn

How to choose a rug

7 ways to embrace autumn colour in your home

Autumn colours for your home